Polycrystalline Diamond (PCD) is diamond grit that has been fused together under high-pressure, high-temperature conditions in the presence of a catalytic metal. The extreme hardness, wear resistance, and thermal conductivity of diamond make it an ideal material for bearings. Individual diamond crystals cleave quite easily when struck parallel to certain planes (the process used to facet diamond gemstones takes advantage of these relatively weak planes). Diamond sintering overcomes the problem of weak planes in diamond gemstones by bonding a mass of small diamond particles onto a larger, coherent structure. Sintered diamond provides greater toughness and durability than single crystals because the individual crystals in a sintered body are randomly oriented. This prevents cracks from propagating along the weak planes where traditional diamond crystals cleave most easily. Sintered diamonds also provide more uniform wear than a single crystal, while maintaining similar thermal conductivity and hardness properties. All of these factors combine to make sintered diamond the ideal material for many bearing applications. 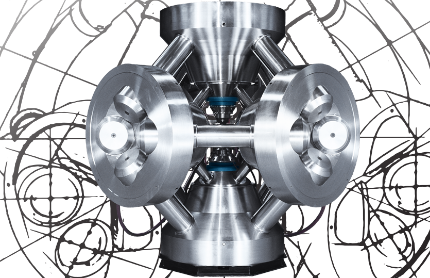 Polycrystalline diamond is known for its high thermal conductivity, low coefficient of friction, high toughness and other preferred physical and mechanical properties. Having a bearing material with high thermal conductivity reduces localized temperature extremes that lead to bearing degradation. During starting and stopping, a high thermal conductivity will reduce the likelihood of causing localized welding of the surfaces, which in turn leads to scoring and galling of the bearing surface. In sliding bearings, low coefficients of friction are desired in order to decrease heat generation and reduce power loses. A bearing material exhibiting a large fracture toughness will decrease the likelihood of race damage during extreme operation conditions. Because of its extreme hardness, polycrystalline diamond is very resistant to wear from abrasive particles in lubricants or process fluids. 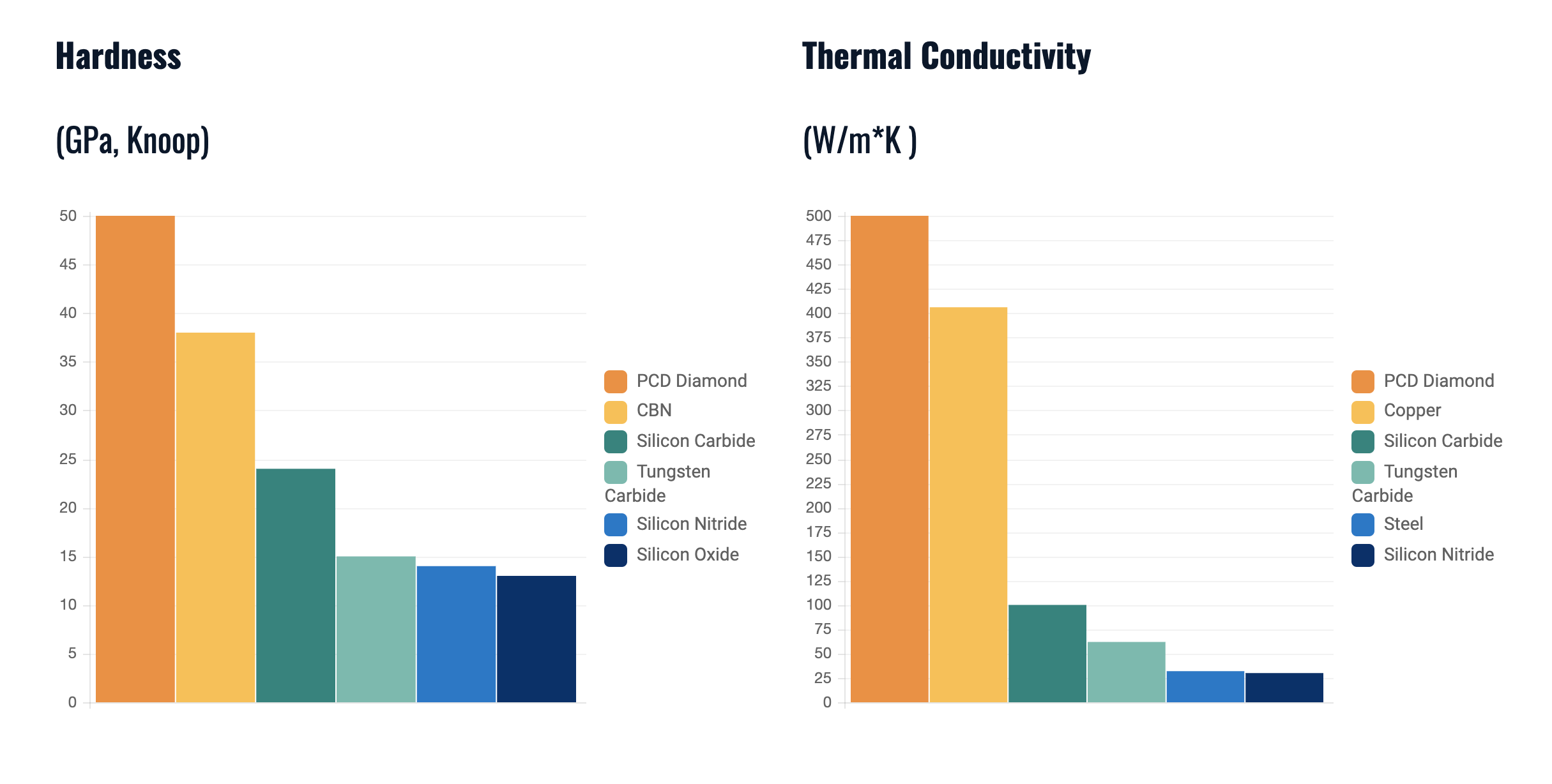 Diamond bearings utilize Polycrystalline diamond (PCD) in their primary working surfaces. In general, bearings allow relative movement or rotation of two machine elements with respect to one another while minimizing heat generation and maintaining alignment between the respective machine elements. There are several classes of bearings. Three of the most common would be rolling element, sliding and fluid film bearings. 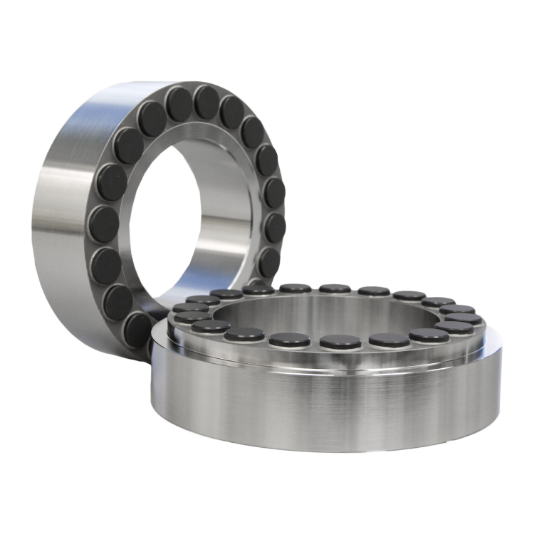 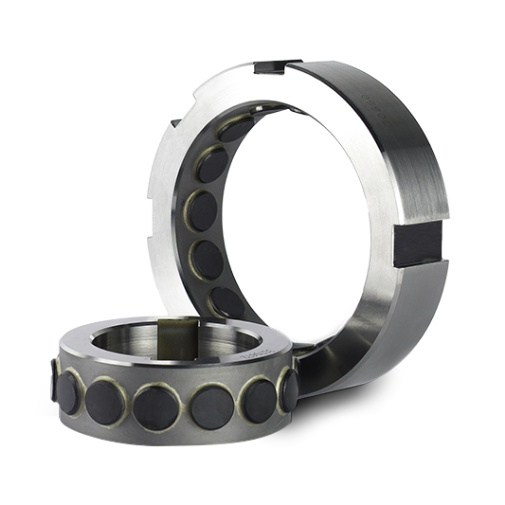 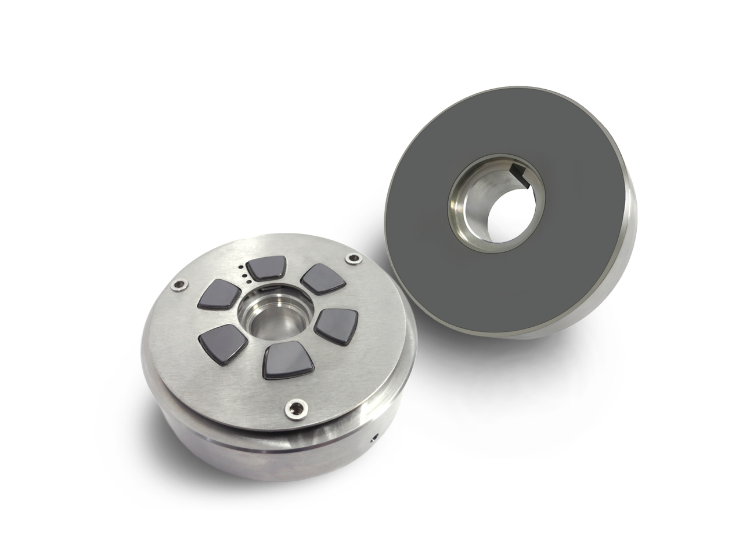 Polycrystalline diamond could, in principle, be used in all three bearing types. Currently, however, they are found in only sliding and fluid film bearings. Diamond bearings consist of precision machined polycrystalline diamond surfaces that run relative one to another. In operation diamond bearings may act as dry sliding bearings with little or no lubricant, semi-lubricated sliding bearings or fully lubricated fluid film bearings.

Because of the properties of polycrystalline diamond, diamond bearings are capable of operating under harsh conditions which include operating with process fluids and severe loading. They are extremely resistant to abrasion and provide bearing lives that are 2 to 8 times longer than tungsten carbide or other hard metal bearings when operating in abrasive fluids. Successful applications include the near-bit bearing set in drilling mud motors and turbines. In these applications, bearing life has been extended, overall tool length has been shortened and bearing reliability improved. Diamond bearings have also found application in power generation and rotary steerable tools where bearing life has been at least tripled when compared to conventional tungsten carbide bearings. The outstanding toughness, thermal conductivity and hardness are the main properties of polycrystalline diamond that make it such an outstanding bearing material.

Sliding bearings use special bearing materials that work well together as sliding parts to reduce friction and thus reducing heat and wear. These bearings are operated with and without lubricants.

Fluid film bearings comprise two surfaces moving with respect to one another in the presence of a fluid lubricant that separates the surfaces. The speed of the relative motion, the viscosity of the fluid, and the geometry of the bearings work together to create the fluid film. The fluid film keeps the friction and heat generation to a minimum and makes wear non-existent as long as the surfaces remain separated. A crankshaft in an automobile is an example of this.

Characteristics of common classes of bearings

Tribology comes from the Greek word ‘tribos’ which means ‘rubbing’. It is a relatively new science that considers the friction, wear and lubrication at moving contacts. Diamond bearing tribology looks at the physics between two diamond surfaces moving relative to one another, most of the time in the presence of a lubricant.

A magnified view of even the most smoothly machined or ground surfaces will reveal a rough looking surface with high asperities and low valleys. Please refer to figure 1. Two surfaces in sliding motion will contact first at these high asperities. It is the action of welding and shearing that takes place on this uneven surface that results in what we understand as friction. This is largely independent of surface area as first described by Guillaume Amontons (1699). 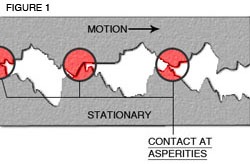 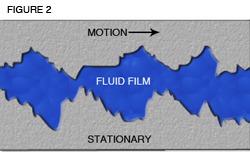 As speed increases with the right bearing geometry and lubricant viscosity, a pressurized fluid film can develop between the two surfaces. This film supports the load and keeps the two surfaces completely separated as shown in figure 2. Under these conditions, friction and heat generation are greatly reduced and bearing wear is virtually eliminated. Compare common characteristics of bearing material.

While decreasing the speed, a point is reached where there is not enough relative velocity to maintain pressure in the fluid film and the gap between the two moving surfaces breaks down. Asperities contact, heat and shearing occur and friction increases.

Diamond bearings have the advantage that they can operate effectively in both the fluid film and mixed lubrication regions. 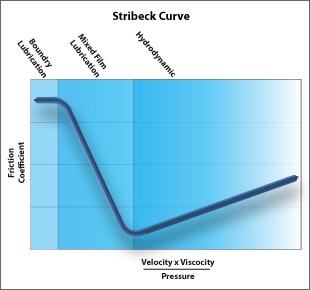 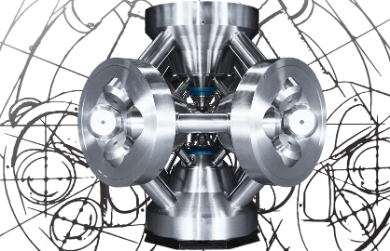 Meet the toughest diamond bearings you’ll ever use. 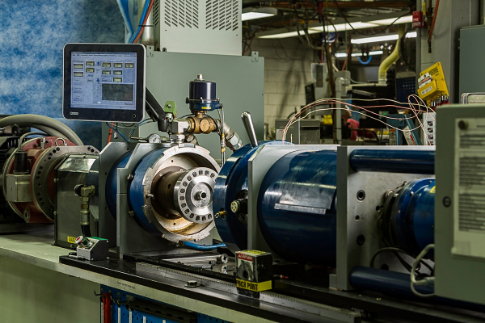 US Synthetic Research and Development 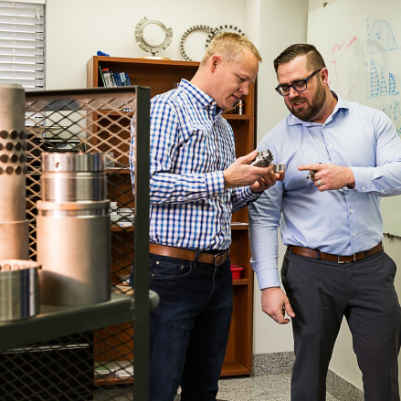 Research and Development for Bearings

Meeting every customer’s need is crucial to a successful product.

Schedule a tour of our state-of-the-art facility.